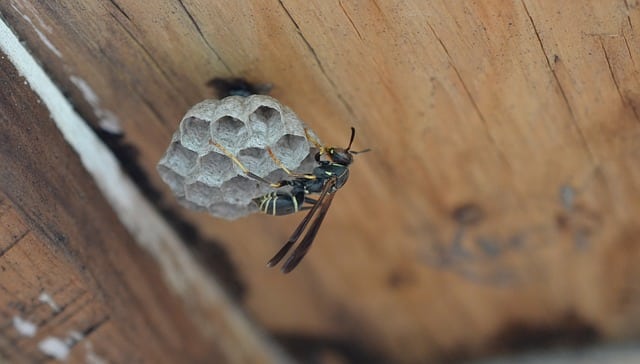 Many people feel a certain dislike towards the wasps, bumblebees and other flying insects. And not in vain! After all, these creatures can harm a person. If such insects fly into your house or apartment – they should be urgently disposed of. And given that the nest is nearby, the issue of its elimination becomes extremely urgent. Let’s find out what danger for a person is wasps and how to drive them out of the house once and for all.

Inconveniences from the neighborhood with insects under the roof

The phrase “Do not touch them  and they will not touch you” is not always true for wasps and hornets. With regard to these insects, you can not be sure that being a few meters from their haven, the malicious flock will not fly out of it. The point is that wasps can smell danger at any moment and rush to protect their house with a whole swarm. And what if a child walks near the nest, besides, unattended?

Wasp is the most dangerous

The insect bite carries a great danger. The wasp can not only severely sting, but can also introduce into the skin a poison that it has plenty of. Unlike bees, these insects can inflict several bites at the same time, each time injecting toxin into the human body. The most dangerous are paper wasps and hornets. The latter are the largest representatives of the genus Hymenoptera, and their bites are the most painful and poisonous. Under the roofs of houses often settle paper wasps.

It’s interesting: Paper wasps got such a name because of the substance that they create for the erection of the dwelling. The fact is that insects make building material for nests according to the principle similar to paper production: they grind fiber of wood, binding them with saliva.

How to get rid of wasps

Before you deal with the withdrawal of insects, you should find out the reason for their visit to your house. For example, at the end of the summer, the wasps are replenished in the family and young people need food. Therefore, in this period, the appearance of wasps can be associated only with the search for food. However, it also happens that insects have already settled in the house. If this is true, then they will come to you very often and the whole horde, and the presence of your favorite food (grapes, apples or raspberries) for them will be optional. A nest under the roof of a house is not difficult to find and its search usually does not take much time. You will immediately see where exactly the insects fly. Often the wasps build their nests between walls and planking, and with direct access to the street. When the place of residence is determined, it’s time to think about how to drive out these “neighbors”.

The withdrawal of wasps and bumblebees from nests is a dangerous occupation. Therefore, before carrying out this procedure, you should take care of your personal health, as well as about the safety of your home. Here are the basic rules that must be observed so that the disposal of the wasps or hornet passed without incident.

Work on the insects should be carried out in tight clothing, preferably in a suit with long sleeves. On the head you need to put on a mesh mask, and on your hands – gloves. You can also buy a special protective suit for the beekeeper.
If the hornet’s nest is located under a wooden roof, then the use of fire is strictly prohibited.
Eliminate the nest preferably at night, when all insects are inside. In addition, at this time of day insects are inactive.
When eliminating an aspen dwelling, it is not necessary to pay attention to individual individuals that flew outside, because when an insect perishes, the pheromone exudes, which increases the activity of the rest of the family members.
If it was not possible to “quietly” get rid of pests and the aspen swarm flew straight at you, then you need to slowly move away from the nest and wait two hours. When the insects calm down, you can try to repeat the procedure.
When using special chemical agents alone, you should carefully read the instructions for their use.
Before you start an independent withdrawal of insects, it is advisable to notify all neighbors and ask them to close their windows and doors.
After examining the safety requirements, you can go directly to the insect removal procedure.

Special substances perfectly cope with their task, battling insects on the spot. But there is one nuance – the use of chemicals can have a negative impact on human health. Therefore, if you decide to get rid of insects through such drugs, do not stay in the room in which they were applied.

Poison insects with baits. This method is considered quite safe for humans, besides, it is easy to implement. First you need to make a bait. For the wasps and hornets, it is best to use a piece of meat or sour jam. They need to add a couple of grams of any liquid insecticide drug, and it is recommended to put the bait either on a plate and put it in a prominent place. Poisoned insects, hitting the nest, themselves spread the microcapsules of the drug, and the whole family will die.
Another way is to cover the nest with a plastic bag with a special preparation inside. In advance it is necessary to prepare a strong package of a large size so that they can cover the nest completely. Then pour in about 200 ml of the previously prepared solution (diluted with water insecticide). And at the end quickly put the bag on the nest so that the wasps do not have the opportunity to get out. For example, the neck of the bag can be glued with adhesive tape to the roof. It is necessary to remove the package not earlier than in 3 days. Before removing the package, it is advisable to make sure that all insects have died. To do this, you can knock on the nest: if the wasps do not emit buzzing – then they are dead.
The third method is the treatment of nests with special chemical sprays. This procedure is desirable to be carried out in the dark. Within 3 days after spraying the drug on the nest, all insects will die.